THE SUSTAINABLE FIGHTING BULL, THE UCTL COMMUNICATIONS EFFORT TO SPREAD THE VALUES OF THE FIGHTING BULL BREEDING WAS INTRODUCED WITHIN THE “ENVIRONMENT DAY” VENUE IN MADRID

The Union of Fighting Bull breeders held the introduction of “The sustainable fighting bull” at the School of Mountain, Forest and Natural Environment Engineering.

The ETSI´s Principal, D. Germán Glaria was in charge of welcoming the venue and showing his satisfaction of being able to El host a meeting where fighting bull breeders are valued as environmental managers in a school that is open to all of those who live by and for the defense of the environment.

Four UCTL breeders took part at the meeting. D. Carlos Núñez as Chairman of the entity who highlighted the importance to carry out this actions in a college environment. He also pointed out that “The UCTL has set as its goal to spread the sustainability of the fighting bull breeding”. Furthermore he rose to the occasion to vindicate that “In the World Environmental Awareness Day” we observed how many ecologist organizations carried out actions and they shrouded themselves in a fake green mantle, we did nothing being as we are real ecologists and environmental managers.

Regarding the “sustainable breeding” section, D. Fermín Bohórquez  highlighted the inherent wealth of the fighting bull breeding in an unique environment and expressed that “turning a traditional farm into a plain destined to fighting bull breeding, environmentals sounds started to change. Birds, insects and indigenous flora have returned”. On the other hand. D. Victorino Martín García, stated the cultural imporatance of this animal and its symbiosis with Mediterranean culture. Dña. Reyes Domecq Domecq, reported her family´s push for torusnm and the importance of opening and showing the breeding farms to the public.

Two doctors in field engineering and teachers of Madrid Polytechnical University D. José Miguel Montoya Oliver and D. Fernando Fernández de Córdoba, pointed out the value of sustainability of the plaisn where this breed´s upbringing takes place. And the latter also pointed out that “Sustainability is the combination of conservation, viabilty and social integration” . In that regard, D. José Miguel Montoya stated that the level of sustainablity of the fighting bull breeding is very high and added that “the handlng of the fighting bull breeding is just plain and simple ecology.

Furthermore, the Chairman of the Madrid Gastronomy Association, D. Luis Suárez de Lezo, highlighted the perks of the fighting bull meat and expressed his satisfaction for the good gastronomical reception of a genuine high-quality product.

‘The bull before the new ecologism as an exposition about change in society and its position regarding bullfight was held by the journalist and writer D. Carlos Ruiz Villasuso, who unraveled  a presentatoin that reflected on the current needs of communication the fighting bull breed currently has.

Finally, Mrs. Dña. Leonor Algarra Solís, Assistant vicedirector of the General Subcommitter for livestock production means of the Ministry of Agriculture, Fishing, Food and Environment” adjourned the meeting by acknowledging the essential work of the fighting bull breeders and the fighting bull as a stronghold of genetic and environmental wealth. 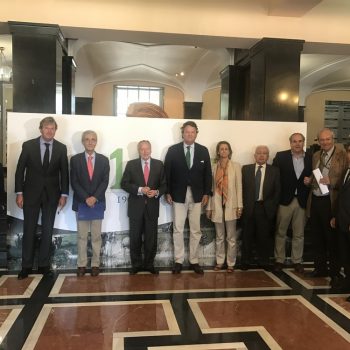 THE UCTL PRESENTS THE #SUSTAINABLE #BULL IN PAMPLONA TO SPREAD THE
ENVIRONMENTAL VALUE OF THESE ANIMALS.

The Fighting Bull Breeders Association presented its communications bid #sustainable #bull within the most international framework for the fighting bull breeding as the Bull Fair is, held in Navarra´s capital city. An initative the goal of which is to spread the social and enviromental values of the fighting bull around four standpoints; Sustainable Breeding, Culture, meat and tourism

This venue took place at the Hotel Europa in Pamplona with a great attendance among which there were breeders and UTCL executives as Mr. José Luis Iniesta, Mr.. Fernando Sampedro, Mr. Antonio Bañuelos, Mr. Borja Domecq, Dña. Lucía Núñez, The Azcona sisters..

The UCTL Treasurer, Mr.  José Luis Iniesta, welcomed the attending crowd and thanked the speakers for their cooperation and the Idoate family for hosting that presentation at their hotel. He also pointed out the importance of the event as it was in the most high-profile scene possible for the fighting bull breeding and in a critical moment for the breeders.

Then, the agricultural engineera and professor of the State University of Navarra Mr. Antonio Purroy, spoke, performing a full exhibition regarding the value of the Iberian plain and how the fighting bull contributes to its sustenance and preservation. Furthermore he emphasized the genetic relevance of the fighting bull as “breed of breeds” . Finally he reported the conclusions extracted from a studio he was working on about the fighting bull meat at the Navarran university.

Breeder and celebrated bull run shepherd, focused his bold intervention by pointing out that “Pamplona is fighting bull itself”. “The fighting bull has put this city on the international map.” He didn´t want to let the opportunity pass for pointing out “the importance of the breeders´ announcement  who for the first time let the institutions know their standpoint, a historical event.  He also poiinted out that “where the people wants and there´s strenght the fighting bull won´t fade away”

The UCTL´s  communication bid wouldn´t be possible without the cooperation of photographesrs mr.  Gorka Azpilicueta and Mr. Arsenio Ramírez, who have set up a place on the internet “Along the paths of the bull” in order to spread images of the fighting bull in the wild. The Bull runner and bull ring photographer Mr. Gorka Azpilicueta stated “The world of the bull is extremely wealthy in every way and sculpturing, paint and photography are part of such wealth.  We provide the images and let the world know how it is and how does the fighting bull lives in the wilderness and what is really the image that the fighting bull breed projects”.

On the next standpont, spoke Mrs  Malena Sanmillán, Manager of the Bovine Cooperative business of Navarra to report about the importance of the fighting bull meat project. She concurred with both  with MrsPilar Idoate, Pamplona’s Europa´s restaurant chef  and also the Chairman of FEDELIDIA(Federation of Associations of Indigenous Fighting bull Breeders) Mr. Borja Domecq in the need to report the good qualities of this healthy product to the rest of the society.

Regarding the fourth standpoint, sustainable tourism, which is critical for Pamplona, Mr. D. Juan Mari Idoate, Vice chairman of the Navarran Hotel Trade Association preported about the undoubtable attractiveness of the fighting bull for the city, the appeal of such animal for tourists and he hinted that the fighting bull will be part of the White Book of Sanfermines which is a work in progress taking place in Navarra´s capital.

Finally, the event was adjourned by mr.César Fernández Salinas, Section manager of the Livestock service of the rural, environmental and local administration department of the local Navarran government. At the end of the event, fighting bull meat products were tried and tasted. 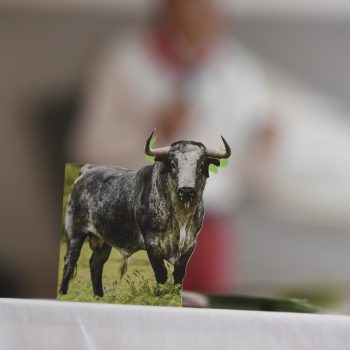 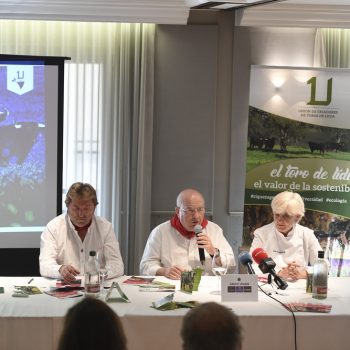 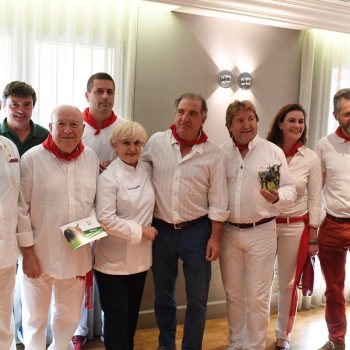 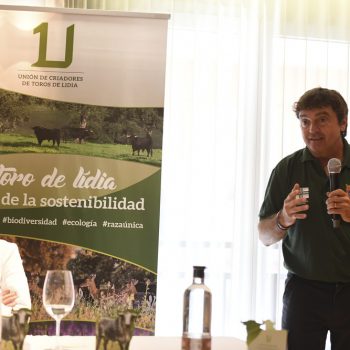 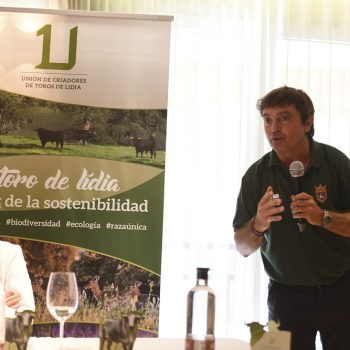 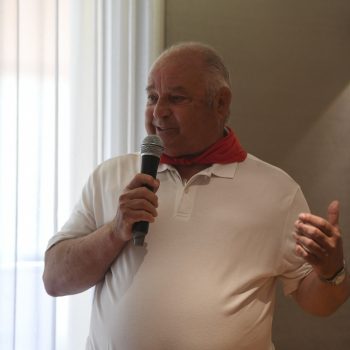 THE UCTL TOOK “SUSTAINABLE BULL” TO SALAMANCA. A NEW WAY TO APPRECIATE THE VALUE OF THIS SPECIES.

This meeting´s purpose was to spread the social and environmental values around four standpoints. Breeding, culture, meat and tourism. Presented by the following speakers; The engineer Mr. Fernando Fernández de Córdoba, the Secretary General of Culture and Tourism of the Castilla y Leon regional government Mr.José Rodríguez Sanz Pastor, The Vice-councillor for Rural Development and principal of the Technical Agriculture Institute of Castilla y León, Mr. Jorge Llorente Cachorro, y and the Tourism and Heritage representative for the Council of Salamanca. Mr. Javier García Hidalgo.

The Breeder´s Associaton Mr.  Julio Pérez-Tabernero Población, inaugurated the day by pointing out that abrió la jornada subrayando que “We the breeders are the real ecologists”  because we work very hard to breed an unique species, we struggle to maintain breeding farms which also are wildlife reserves and we preserve the rural environment.

On his part, the Secretary General of Culture and Tourism of the regional government, stated that “The fighting bull culture has an idea of sustainability ingrained in it”  On one side from the breeding and selection of livestock from a very sustainable in extensive terms livestock farming and also for the Taurine world, be it on major fighting bull venues or more local ones, has an idea of sustainabilty in its task of keeping the rural environment populated either tanks for their enterntainment activities or the professional and employment side.

“Sustainability is no one´s exclusivity and nothing is more sustainable than producing meat in the plains”  That was how the Vice-Councillor Vice-councillor for Rural Development and principal of the Technical Agriculture Institute of Castilla y León opened his statement and also praised the UCTL for the project he describes as “The pretense of unifying holm oak preservation(common in the Salamanca plains) fighting bull meat and Mediterranean food.

The Councillor for Tourism and Heritage of the Council reported about the insititution´s bid for . 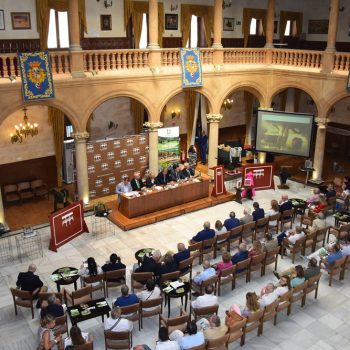 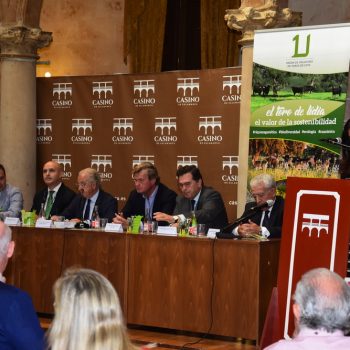 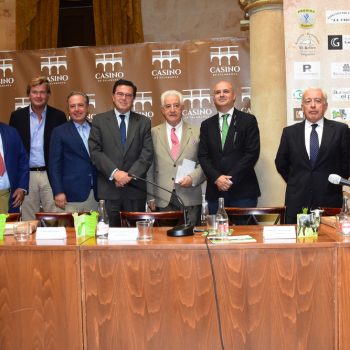 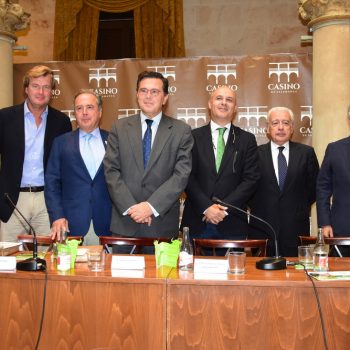 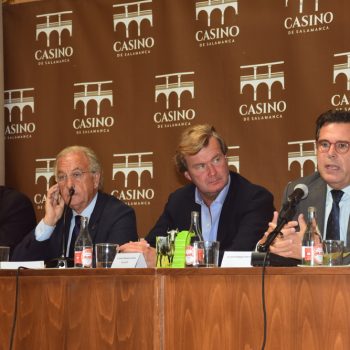