Origins of the Fighting bull

The fighting bull means the greatest contribution of Spain to world genetics and animal breeding. Before innovative English breeders started raising important bovine and porcine breeds in the 16th and 17th centuries. Even before the creation of the English thoroughbred family tree registry, the fighting bull was already being selected in Spain because the first Spanish breeders already classified and wrote down their genealogy, behaviour and features in crude breeding farm books. 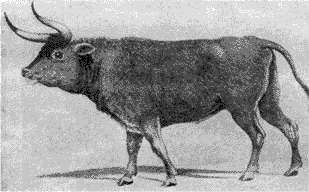 The Uro, pictured on a painting bought from an antiquary in Augsburg. The polish name for the bull´s forebear “Thur” can be read on a corner of the original painting.

The civilizations of teh past have left us with hard-to-unravel enigmas. Many cave paintings picture bull representations form the 5th to the 3rd millennium BC. According to many Archaeologists these paintigns were done with a magical intent as a  wish for a great hunt.

The dominant fauna in the Iberian Peninsula during the Paleolithic period was comprised of horses, bulls, deer, boar and other species. The European man of the time was a big game hunterm among its prey was the Uro. He was nomadic and lived wandering the land in pursuit of his prey he hunted as its nourishment, fullfill his milk and flesh diet, dress their hide and use their strength as a  tool for harvesting.

After that  in the 5th and 4th millennia comes a time when mankind shifts from hunting to breeding and agriculture, before settling in an rely solely on the latter activities.  It was maybe at this stage when certain bovine specimens accepted taming and the subsequest shepherding while the man observed its reactions andi learned  certain skills which in some measure it can be considered as very rudimentary, defensive and extremely profitable form of bullfighting. The prehistoric man  hunted throught “joint harassment”, provoking entire herd stampedes towards some sort of natural trap(cliffs, narrow gorges, swamp areas) where they comfronted their prey and captured or slaughtered them. In this bull hunt is where bullfighting may have started.

The Uro or wild bull was tamed in the East(Same as the dog) since very ancient times. Then it arrived to Northern or Central Europe during the Neolithic, the turf ox. which most of our current alpine and Central European breeds come. The ox was tamed and worshipped in Egypt and Central Asia. 5000 years ago.

Succeeding climate variations during the Cuaternary period forced changes within the flora and fauna, making a lot of species go extinct. But the climate was never too rigorous and most of the flora and fauna survived the changes, being more probable that migrations of bovine stock herds from Central Europe and Northern Africa as the Iberian Peninsula was still linked to the African continent.

The Taurus Era goes from the years 4513 to 2353 BC and it was featured by diverse civilizations started worshipping taurine divinities. In every Mediterranean culture and the Celtic world, the magic belief in the magical properties of the bull´s genetic virtues and their transmission to mankind made a sacred figure and a cult object in many religious rituals and festive celebrations. In the Greek Mythology, the form of Minotaur or bull to kidnap Europe, in Egypt, the bull-shaped Apis is the god of fertility and abundance, Hebrews adored the Golden Calf, the winged bulls of Babylonia or the Cualunge Irish Bull. The Roman world adopted the persian cult to Mithra the young god that sacrifices the Primordial Bull to create the world. Vineyards came out of its blood, Wheat came out of his spine and the animals came out of its semen.

Julius Caesar described the Uro 2,000 years ago which lived in teh Hercinian Forest in what is today Germany, on the shores of the Danube, highlighting its untamed demeanor, bravery and swifgness and the amusement its hunt meant to young people. It was a very dangerous and huge animal which inhabited the woods of the Northern and Central Europe. The Germans called it “Auroch” or wild bull and it was Julius Caesar who introduced the word in the Latin language.

The Uro went extinct in the Middle Ages. It´s the savage forebear of every domestic bovine breed of today. The fighting bull of nowadays is, among every descendant of the uro, the one that best preserves its features.

THE BULL IN HISPANIA

The fighting bull comes form the uro or wild bull from the middle ages, very numerous all across Europe, which very possible contributions from the bovine heads that were brought by Celtics who inhabited the north of Spain and Portugal and contributions of the livestock that migrated to the Iberian Peninsula in the Cuaternary era, at the same time as glaciations.

As well as in the Greek-Roman culture, the bull is very close to Hispanic culture. It´s the most representative animal to the point to be sinonymous to the national celebration and its figure contributes every art from cave paintings to the crude Iberian boars to the most current rtrends of the Spanish culture, represented in drawings, carvings,paintings, sculpting, and of course in our literature. The bull plays a critical role in the Iberian Peninsula´s economy because it alters the landscape because of the need of keeping large herds and fosters the creation of livestock fairs which were of the utmost importance in the development of towns and cities,

The fighting bull originated in Spain and from here it spread to Portugal, Southern France and many countries mainly during the 20th century.

Thanks to the concurrence of interests of popular culture with deep taurine roots, the equestrian practices of the nobles in the Middle Ages, the skill for playing with the bulls the personnel in charge of their handling in the plains achieved and the smart art of breeding and selecting of the breeders, this beautiful animal was created one of the greatest treasures of the world´s zootechnology.